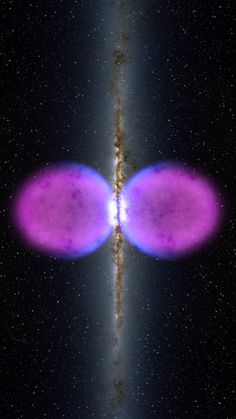 Gamma-ray observations by Fermi revealed previously unknown features in our galaxy that stretch halfway across the sky. These gas bubbles are named as Fermi Bubbles, these mysterious structures , emerge above and below the center of our galaxy, spanning a total length of about 50,000 light-years.

Our galaxy does glow brightly in gamma rays, which result when high-energy particles called cosmic rays interact with gas and dust. The Fermi Bubbles emit higher-energy gamma rays than the rest of the galaxy’s disk. It is a possibility that in Milky Way’s central black hole went through such a phase in the past, producing jets responsible for the Fermi Bubbles we see today.A completely unexpected discovery like the Fermi Bubbles is a special treat. However, scientists know that there are many more surprises waiting to be uncovered by Fermi.

For the first time, scientists have observed visible light from the Fermi bubbles, enormous blobs of gas that sandwich the plane of the Milky Way galaxy. This Fermi bubble, newly spotted glow was emitted by hydrogen gas that was electrically charged, or ionized, within the bubbles. Astronomer Dhanesh Krishnarao of the University of Wisconsin–Madison and colleagues described the finding June 3 in a news conference at the American Astronomical Society virtual meeting and in a paperposted at arXiv.org on May 29.

Using the Wisconsin H-Alpha Mapper telescope, or WHAM, the researchers determined that the gas flowed outward at about 220 kilometers per second. The estimate agreed with an earlier measurement made using ultraviolet light.By taking measurements in other locations, the researchers hope to more fully map out the velocity of the gas.

The study of it will help in nail down its origin and further lead into new discoveries.