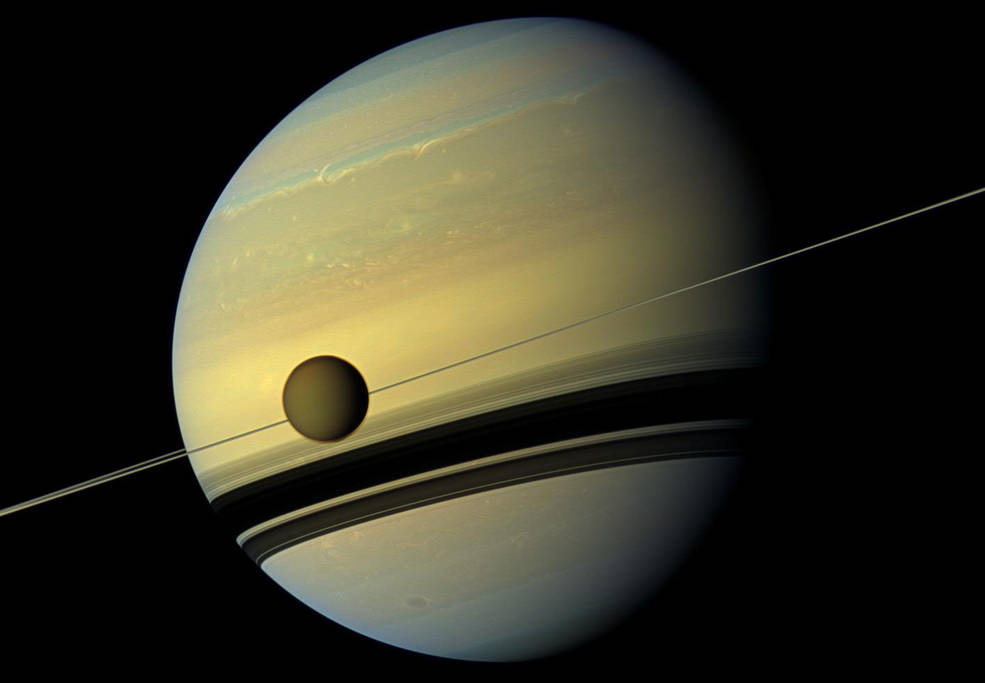 Saturn the jewel of the solar system is the sixth planet from the Sun and the second largest planet in our solar system.Adorned with thousands of beautiful ringlets, Saturn is unique among the planets. It is not the only planet to have rings—made of chunks of ice and rock—but none are as spectacular or as complicated as Saturn’s. Saturn has the most spectacular ring system, with seven rings and several gaps and divisions between them.Few missions have visited Saturn: Pioneer 11 and Voyagers 1 and 2 flew by; But Cassini orbited Saturn 294 times from 2004 to 2017.

Our own Moon floats away from Earth a tiny bit more each year, other moons are doing the same with their host planets. As a moon orbits, its gravity pulls on the planet, causing a temporary bulge in the planet as it passes.

Over time, the energy created by the bulging and subsiding transfers from the planet to the moon, nudging it farther and farther out. Our Moon drifts 1.5 inches (3.8 centimeters) from Earth each year.

Scientists thought they knew the rate at which the giant moon Titan is moving away from Saturn, but they recently made a surprising discovery: Using data from NASA’s Cassini spacecraft, they found Titan drifting a hundred times faster than previously understood — about 4 inches (11 centimeters) per year.

Scientists know that Saturn formed 4.6 billion years ago in the early days of the solar system, there’s more uncertainty about when the planet’s rings and its system of more than 80 moons formed. Titan is currently 759,000 miles (1.2 million kilometers) from Saturn. The revised rate of its drift suggests that the moon started out much closer to Saturn, which would mean the whole system expanded more quickly than previously believed.

“This result brings an important new piece of the puzzle for the highly debated question of the age of the Saturn system and how its moons formed,” said Valery Lainey, lead author of the work published June 8 in Nature Astronomy. The findings on Titan’s rate of drift also provide important confirmation of a new theory that explains and predicts how planets affect their moons’ orbits.

For the last 50 years, scientists have applied the same formulas to estimate how fast a moon drifts from its planet, a rate that can also be used to determine a moon’s age. Those formulas and the classical theories on which they’re based were applied to moons large and small all over the solar system. The theories assumed that in systems such as Saturn’s, with dozens of moons, the outer moons like Titan migrated outward more slowly than moons closer in because they are farther from their host planet’s gravity.